This article was co-authored by David Ucko and Jamie Bell. 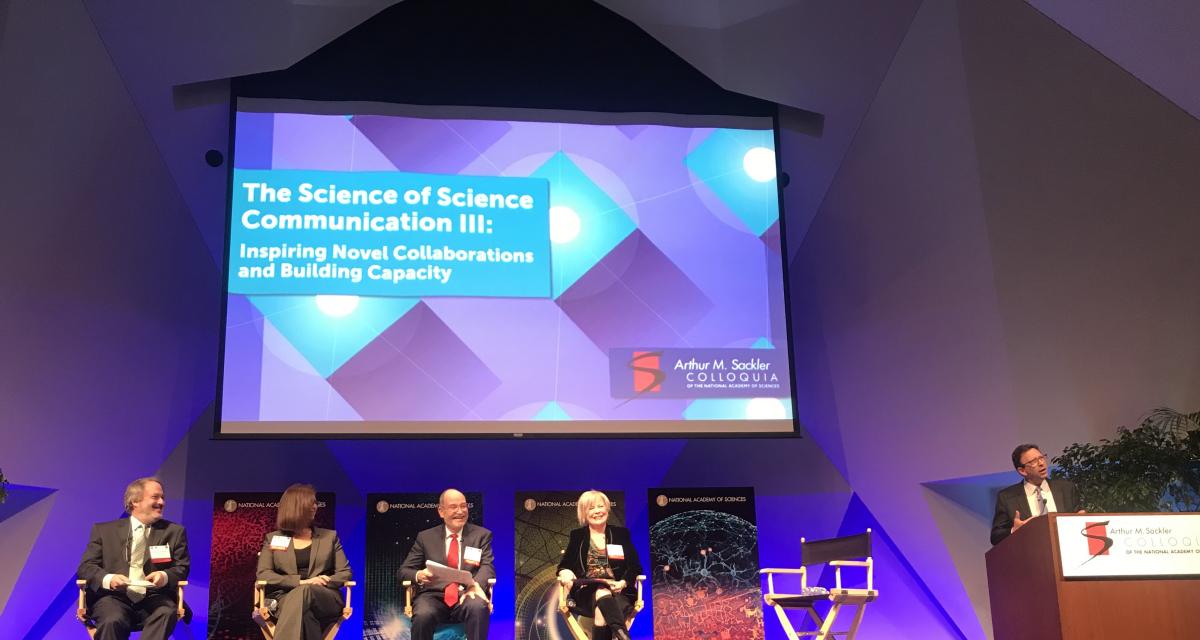 "It’s when the consensus reports come out that the work begins."- Dominique Broussard, University of Wisconsin, Madison

This third National Academy of Sciences (NAS) Sackler Colloquium highlighted current issues in the “science of science communication” through presentations by social science researchers, media representatives, and scientist practitioners (see agenda). It was the most highly attended of the three related colloquia so far (others in 2012 and 2013), and in addition to the 550 people who participated in person, the live webcast drew more than 16,000 views (with a combined viewing time of 8,000 hours) from all over the globe. The greater level of interest may reflect increased concern about the perception and use of science in public discourse and policy. The primary focus was on providing scientists with guidance on communicating, primarily through the media, broadly defined. The complete video recordings from the live webcast are now posted on the Sackler YouTube Channel, and individual sessions and presentations are linked throughout this blog.

Several sessions presented content of interest to those involved in informal learning. Alan Leshner (CEO Emeritus, AAAS) summarized findings and recommendations from the recent National Academies report Communicating Science Effectively: A Research Agenda. He identified the challenge of encouraging scientists to practice evidence-based approaches for public engagement, which he termed an “acquired skill.” Too often, they fail to focus on their audience, communicating “to” them rather than “with” them. Leshner emphasized the value of framing to address the mental models of the audience, as well as going “glocal,” making global issues local and thereby more relevant. He concluded his remarks by jokingly noting that “everyone is secretly human,” even scientists.

David Guston (Arizona State University) cited the importance of salience, credibility, and legitimacy in the context of boundaries between science communication stakeholders. Salience refers to the relevance of the scientific information; credibility to information that is authoritative, believable, and trusted; and legitimacy to the “fairness” of the process that produced the information and whether it reflects appropriate values and perspectives. Because those involved on different sides of a boundary may perceive and value these three factors differently, “bridging” may be necessary for communicating successfully. Further details on this topic can be found here. Guston concluded by advising scientists to become their own “transmedia enterprise.”

Susan Fiske (Princeton University) emphasized the role of trust in science communication, noting that it is fragile, easily lost, and hard to regain. Scientists rate high on measures of competence, which is based on their expertise. However, the public is less certain of their trustworthiness, their motivation to be truthful. Public perception of “warmth” reflects that trust, the extent to which a scientist is perceived to be “on their side.” To be credible, communication should convey both warmth and competence.

Well-known author and surgeon Atul Gawande addressed the mistrust of science. He pointed out that skepticism is a normal aspect of science, since “the scientist explains the world by successive approximations” (quoting astronomer Edwin Hubble). However, the tactics employed by some religious or industrial groups that oppose the scientific consensus on such issues as the link between the MMR vaccine and autism and climate change are more extreme. While claiming “truer” scientific authority, explained Gawande, they instead promote pseudoscience by accusing established scientists of a conspiracy; producing fake experts with opposing perspectives; “cherry-picking” data to discredit the dominant view; creating impossible expectations for established science (and moving the “goalposts”); and employing false analogies and other logical fallacies.

Panelists in other sessions discussed science in the news (such as artificial intelligence and autonomous vehicles and human genome editing), communicating uncertainty, threats to science’s reputation, incentives for scientists to communicate, and evaluating science communication on Twitter. Two teams that recently received NAS Building Capacity for Science Communication Partnership Awards presented their plans: one evaluating new approaches for promoting vaccines, and the other producing a synthesis of evidence-based communication practices for scientists to best affect “policy makers’ understanding, perception, and use of science.” A range of communication styles and approaches were on display by the speakers over the two days, with some notable attention to modeling best practice, as in Laurie Weingart’s (Carnegie Mellon University) presentation on communicating across disciplinary boundaries.

Elizabeth Christopherson (Rita Allen Foundation) moderated a session on philanthropists’ views of science communication, where she mentioned “the opportunities we have to engage the public with informal learning,” a point she noted was underscored on a recent Media Impact Funders webinar that featured Kathleen Hall Jamieson and Arthur “Skip” Lupia. These Sackler Colloquia provide an unexplored forum for designers, researchers, and evaluators of informal STEM learning experiences to contribute and learn. Efforts by CAISE and others to bridge informal learning and science communication, and their integration in a recent National Academies report are indications that the ecosystem and knowledge base of related practice and research is expanding and overlapping. Inclusion of these perspectives can build on, broaden, and enrich the description of the “science of science communication” outlined in a recent white paper, Science Communication Research: Bridging Theory and Practice: “social scientists develop and empirically test specific communication strategies, principles, and practices.” The need for and approaches to bridging research and practice addressed in the paper are areas of work that have parallels and traction in informal and formal STEM learning, as evidenced by the work of the Research + Practice Collaboratory, as one example.

Several areas for suggested improvements emerged from attendees’ feedback, Twitter and comments, and questions submitted to the livestream feed. One recurrent theme was placing more emphasis on diversity in the selection of panelists, topics, and research (although co-organizer Baruch Fischhoff recommended the related work of Medin, Bang et al). As one attendee put it, “the stage did not look enough like the audience.” Another trope was encouraging more presenters themselves to effectively model evidence-based communication practices. During a break, one science communication trainer remarked: “When those who yearn for data points on the effectiveness of communication avail themselves of effective communication, forward momentum will be more robust and the results will be better understood.” Finally, Rick Duschl (Penn State) identified the “need to broaden the conversations,” which in his summary comments, Dietram Scheufele noted could be more “ethical, moral, and societal in nature.” Based on the record attendance and informed, dynamic participation of the in-person and streaming audiences, future Sackler Colloquia have a wealth of input and growing interest to build on for the design of sessions and program. As one science society president who has attended all three colloquia put it: “I really value the networking at this event because there are few venues that bring together scientists, science communicators, educators, researchers, and funders in one place.”

Written proceedings of the Colloquium will be published by National Academies Press, and papers based on the talks and presentations will appear in a special issue of the journal PNAS.

The Oxford Handbook of the Science of Science Communication

ScienceCounts survey of public attitudes towards issues for scientific research