In my last post, I described the idea of an “exempt” project, that is, one that an IRB has determined does not require ongoing oversight. This post has two parts. The first contains suggestions for designing your project so that it is more likely to be exempt by minimizing risk to participants. Within the limits of doing a good job protecting human subjects, it is to the advantage of a project designer to figure out how to make the IRB process relatively smooth, either by creating a project that is exempt or by streamlining the consent process. Remember, however, that you still need to go through the IRB process for an exempt determination to be made. The suggestions in this post are NOT a substitute for that step.

The second part of this post describes a method for obtaining consent in situations where there is minimal risk to participants—but not so little that consent can be avoided altogether. This “implied consent” method is particularly helpful in situations where audio or video recording is happening in a public space.

Limiting the Risk to Study Participants

Much of the risk to people who participate in educational or visitor research comes from information about them being identifiable, as opposed to the kind of injury that might result in a medical trial. Therefore, one of the key ways to limit risk is to make sure that no identifying information about participants is collected. Thus, if you are doing research by collecting clickstream data from a website or by administering a survey that has no identifying information associated with it, your research is likely to be exempt. Collecting anonymous keystroke data from games is also a limited-risk situation. Similarly, if you are doing a timing and tracking study that involves unobtrusively following visitors and collecting their start and stop times at exhibits, as well as a few demographic details such as gender and age category, that is likely to be an exempt study. Even if you conduct interviews with visitors, your study may be exempt if you do not collect names and addresses of the interviewees. In these kinds of cases, you would probably not have to get informed consent from participants, as there is virtually no risk.

Do you have other suggestions for “limited-risk research designs” (i.e., those that limit risk to participants enough that informed consent may not be necessary?) Please add your ideas as comments on this post.

Things get more complicated when you are video recording research subjects, since the image of a person on a video recording or even a still photo constitutes identifiable information. Some people object to being photographed or video recorded for religious or cultural reasons. If you want to do individual video recorded interviews, it’s relatively easy to let people know what will be done with the resulting data and to give them the option of refusing to be interviewed. But if you’re interested in setting up a video camera in an exhibit space to capture what visitors in general are doing, the consent process can get unwieldy, given the large number of people who might enter the space. Getting signed consent forms from a large number of individual visitors can be expensive, difficult and close to impossible in some settings. 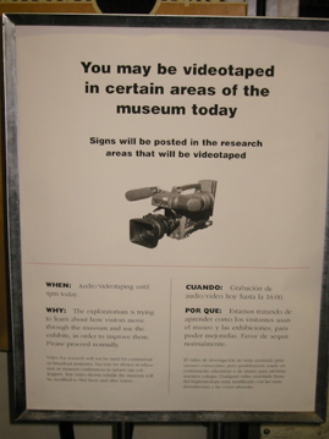 Sign indicating to visitors that they may be "videotaped" while they view an exhibit. From Gaining Visitor Consent: Testing the Posted-Sign Method.

To deal with this quite-common situation, Josh Gutwill, Director of Visitor Research at the Exploratorium (who is a frequent and helpful commenter on this blog), tested an “implicit consent” scenario in which he posted signs letting visitors know that "videotaping" was taking place in a particular area of the museum for research purposes.1 This technique had been used previously by several researchers, with the assumption that visitors would notice the signs and avoid that area if they had an objection to being video recorded. But Josh went a step further and actually tested this assumption by questioning visitors to make sure they had seen the signs and had considered the implications of entering the area where taping was happening. In his first study, Josh found that 75 percent of the over 200 visitors who were interviewed had seen and read the sign. Of those who had not noticed the sign, only a few were concerned about the "videotaping" or said that if they had read the sign, they would not have entered the area.

Josh was not satisfied with the 75 percent rate, however, and did a further study to try to increase the percentage of people who noticed the signs. In this second study, in addition to posting signs at the entrance to the museum and the entrance to the exhibit area being video recorded, he posted signs on individual exhibit elements and made sure the camera itself was obvious by putting a blinking light and a “recording” sign on it. With these enhanced measures, almost all visitors (99%) reported knowing that they were being recorded and the few who didn’t reported that they didn’t mind.2

Sign indicating to visitors that they are being "videotaped" while they view an exhibit. From Gaining Visitor Consent: Improving the Posted-Sign Method.

It is important if you are using an “implicit consent” method such as this to post signs at the entrance to your venue, so that visitors don’t find themselves in a situation in which they have paid to enter, but do not feel comfortable viewing the very exhibit they came to see because of the video recording. It’s also important to use this approach judiciously where children are concerned. Since children cannot officially make informed consent decisions, it’s important that a parent—or, at least, an adult who has taken responsibility for the child’s presence at your venue—be present. This is not a method that can be used for field trips where large numbers of children without their parents might visit.

The final blog post in this series will contain links to resources such as IRBs that have been recommended by members of the informal science education community, sample IRB protocols, and sample consent forms, particularly those that have been written with care to keep the reading level reasonable.