A museum-school partnership in Bogotá, Colombia, fosters socio-cultural connections to science and technology

Gonzalo Peñaloza was the lead author on this blog, with contributions from Lina Quijano, Sigrid Falla, and Sara Márquez. The blog is excerpted from a Spanish-language article in NÓMADAS, a publication of the Instituto de Estudios Sociales Contemporáneos, Universidad Central in Bogotá, Colombia. All authors are staff members of Maloka. Lina, Sara, and Gonzalo are members of the research and evaluation team, and Sigrid is the director of architecture of experiences.

Science and technology museums in Latin America, as in other parts of the world, have been transitioning since the 1980s into spaces that are oriented toward experimentation, active exploration, and interaction between science and the public (Rocha & Marandino, 2017). Many of these institutions now view their visitors as active subjects who have agency over their own learning processes. To meet visitors’ needs, their educational frameworks focus on providing experiences to foster public engagement with science (Hein, 1998).

This new focus has established science museums as a platform for a particular type of science communication that goes beyond the simple presentation of information. Through engagement, science and technology museums also facilitate the creation and exchange of political and cultural meanings, ideally among diverse social groups.

Maloka, a science center in Bogotá, Colombia, develops strategies in partnership with schools, using educational and communication tools such as inquiry based-learning, active participation, and two-way dialogue between mediators and students to promote public engagement with science and technology. These processes facilitate meaning-making between different actors regarding their interests and learning needs, as well as the use and generation of new knowledge in a particular context (Franco-Avellaneda & Pérez, 2010).

A partnership to expand the school day

Recently, Maloka developed a program called “Centers of Interest” as part of a government initiative to extend the public school day. The program is composed of weekly sessions designed for primary and secondary schools. In the first part of the program, Maloka staff guide students through hands-on activities around different science topics. In the second part of the program, students develop a project linked to a classroom question or interest, such as preserving the watershed or designing waste management solutions.

Within the Centers of Interest program, learning is seen as a process not only for sharing significant scientific information but also for helping learners make sense of the natural and social world. In addition, learning is viewed as being based on individual and collective experiences, and it includes cognitive, affective, attitudinal, and behavioral aspects. And communication is embodied as a process in which meaning and sensemaking from different cultural and political perspectives are created and shared.

Evaluating the impact on students

The Centers of Interest program was implemented in 2017 and has since reached 1,910 students from grades 5 through 9, at 11 public schools in Bogotá. A qualitative approach was used to establish the impact on the participating students with regard to their relationship to science and technology within the socio-cultural context. A set of previously designed indicators of “social appropriation of science and technology” was used (Daza-Caicedo et al., 2017).

Note: The “social appropriation of science and technology” is an umbrella term similar to “public engagement with science,” which is more commonly used in the U.S. It refers to a way of promoting relations between science and society through active community participation with the goal of democratizing knowledge. These approaches aim to facilitate meaning-making between different actors regarding their interests and learning needs, as well as the use and generation of new knowledge in a particular context.

The assessment strategy included observation during students’ participation, pre- and post intervention workshops, ethnographic observations, and focus groups. These tools allowed for a comparison between students’ ideas before and after the intervention and provided information about possible changes in their perceptions and practices regarding science and technology. Building on “Grounded Theory” (Cuñat, 2007), the data were coded in order to make sense of the students’ interactions, which resulted in relevant findings and possible explanations of the observed phenomena.

In order to understand how the participants made meaning through their social interactions, we used “symbolic interactionism,” an analytic tool that is concerned with patterns of interaction between individuals (Goffman, 1970). This tool made it possible to study the social appropriation of knowledge by participants and to focus on the relationships between the subjects and their world views. 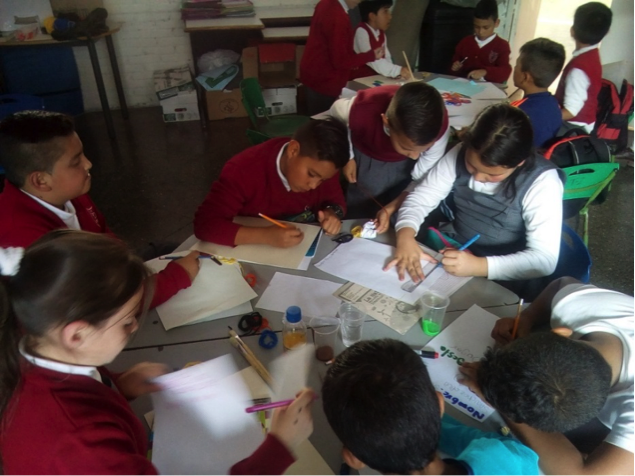 Students related scientific and technological knowledge to four spaces that were a part of their socio-cultural context: home, neighborhood, school, and media. Students were concerned about environmental, security, and mobility problems, and they identified relationships between scientific and technological knowledge in the context of those problems.

In fact, some students proposed possible solutions to local problems. This observation suggests that, in addition to learning concepts about science and technology and using new tools to investigate them, the students reported that they became more aware that they can be part of the solution to their community problems and that science can be useful in that enterprise.

Students also saw practical value in the activities they performed and found science and technology relevant to their everyday experiences. For instance, one student commented: “I learned to be creative and to reuse and recycle.” In a focus group, another student shared having learned “to make a hypothesis,… to do experiments; to know how to think , to develop my creativity, to be able to focus on technology and learn more about it, to make inventions.” These and other comments indicated that the program leverages the relationship between emotion and learning, which is key to establishing interactions among knowledge, context, and subjects (Fredrickson & Branigan, 2005).

Our findings allow us to conclude that the students’ perceptions of science (as an abstract issue) and technology (as an artifact) changed during their participation in the program. We observed that they developed procedural and active conceptions of science and technology, understanding them as collective practices that are built step by step. These outcomes were enhanced by the program’s efforts to bridge the gap between the museum and schools.

This research shows how participants construct meanings from an approach that is not limited to reproduction or transmission of existing information (Gómez & Peñaloza, 2014). We propose learning and communication approaches that empower people to take on critical positions regarding knowledge, culture and social structure.

Rocha, Jessica and Martha Marandino, 2017, “Mobile Science Museums, Centres, and Their History in the Public Communication of Science,” in: Journal of Science Communication, Vol. 16, No. 3, pp. 1–24.