Human subjects regulations are designed to protect participants in very particular settings: those in which research is taking place and in which participants may be “at risk.” Institutional Review Boards (IRBs) decide on the procedures researchers need to follow based on a set of definitions and regulations. The first of these is the definition of “research involving human subjects.” If an activity is considered “human subjects research,” then it must follow certain procedures for getting informed consent from those human subjects unless it is considered “exempt” from these procedures. The United States Department of Health and Human Services (HHS) Office for Human Research Protections (OHRP) has provided a set of decision charts1 for deciding what kinds of procedures a researcher needs to carry out to protect human subjects. This post provides a guide to the decision charts that define human subjects research and those that describe the most common exemptions, highlighting some of the most important questions from the perspective of informal settings.

All federally-funded research that involves human subjects requires official IRB approval. This requirement is enforced by U.S. agencies such as the National Science Foundation, the Department of Education, and the National Institutes of Health, among others, by requiring an approval letter from an official IRB before funds are released. Since evaluation often builds knowledge that is also generalizable, in practice all proposals to the NSF Division of Research on Learning in Formal and Informal Settings (DRL) require IRB review in order for an award to be made. Some private foundations also require IRB approval. Research at an informal education institution that is funded in other ways (e.g., out of operating expenses or from some private foundations) may not legally be required to have official IRB approval. However, the ethical issues are no different, so many professionals believe that all research studies that involve human subjects, regardless of funding source, should be under the supervision of an IRB. Most formal education institutions such as universities or K-12 schools have institutional policies that require IRB approval for all research, regardless of the funding source.

Is your activity “research that involves human subjects?”

The first important question is: does what you’re doing count as research? In order to be considered research, an activity has to have two main characteristics: 1) it has to be a systematic investigation; and 2) it has to be designed to contribute to generalizable knowledge. While these criteria sound somewhat heady, they describe most of what we do when we investigate questions about learners. Research involves human subjects if you’re obtaining information about living individuals. Again, this is almost always true in informal educational settings. This information may be obtained directly from the individual (e.g., by asking) or by indirect methods such as observation. Many of the studies conducted in informal education organizations are designed to be generalized, or applied beyond a specific program, project, or organization. Our questions usually aren’t just about the 20 families who happened to come to the exhibit or visit our website during our “research time,” but about the larger group of potential learners whom they represent. We hope that what we learn from our study generalizes to a larger group.

Here is where the decision chart gets a little more complicated. If the research involves intervention or interaction with the individuals who are involved, then it is definitely considered “human subjects research.” This would be the case if you were interviewing people or if you were engaging them in an activity. Even if you don’t actually interact with people, though, your activity is considered “human subjects research” if the information you are collecting is individually identifiable, that is, if the identity of the person will be associated with the information that is collected and if this information is private. 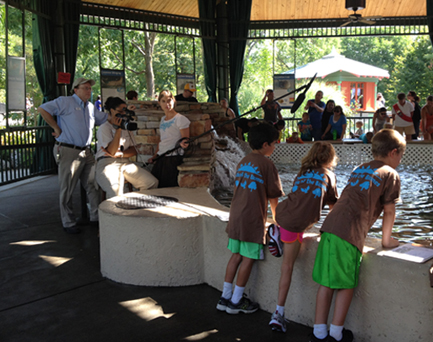 Informal settings complicate the definition of “private,” as people’s expectations about being observed or having their behavior recorded are influenced by the context. When people are in a hospital, for example, they might expect to be monitored for security but they probably do not expect that they will be observed for other purposes without their knowledge. Visitors to informal institutions are likely in a similar situation. They can get upset if they feel they are being observed without their permission. On the other hand, some observations might seem normal, such as a supervisor watching how an after-school program is going or a program keeping track of how long a person dwells on a particular webpage, as long as no identifying information is collected. In deciding what consent procedures a researcher must follow, IRBs will often consider what an individual’s assumptions are about the “privacy” of their behavior in a particular setting.

Even if your activity is “research involving human subjects,” might it be exempt from IRB approval?

The OHRP regulations stipulate that some activities entail so little risk to subjects that formal oversight of the research by an IRB is unnecessary. They are declared exempt. A study that is exempt is not monitored by the IRB, but an exempt study would still need to be conducted ethically, and therefore, may need to include informed consent, protection of confidentiality, and other ethical obligations. Only an IRB can determine if a study is exempt, so having a project that meets the criteria for exemption does not eliminate the need to consult with an IRB. It may, however, reduce the cost of an IRB’s involvement, as they would need to spend less time and effort on reviewing an application that qualifies as exempt.

A research study may be exempt if it involves ONLY educational tests, surveys, interviews, or observations of public behavior AND:

More generally, research projects in informal contexts are most likely to be exempt if they don’t involve children under the age of 18. While it is not impossible to have an exempt project that involves children, IRBs tend to be especially concerned with data collected about them, as they are considered more vulnerable than adults.

Another kind of study that is likely to be judged exempt because it does not put individuals at risk is one that uses a database that already exists and that contains no identifying information, such as clickstream data about web or multimedia access.