This blog was written with contributions from Dejah Powell, an environmental organizer in Chicago, and Kimberly Swift, an education specialist at the Indiana Dunes National Park. Martha is a project director for Interpreters and Scientists Working on Our Parks (iSWOOP), based at TERC in Cambridge, MA.

Indiana Dunes National Park, formerly a national lakeshore, is the newest U.S. national park. It spans 15 miles along Lake Michigan, about 40 miles from the south side of Chicago, and contains a wealth of biodiversity. The superintendent of the park, Paul Labovitz, is interested in making the park welcoming to all visitors, including those who have not historically felt welcome at national parks. Research has shown that visitors to national parks across the country have not reflected U.S. demographics (see Further Reading at the end of the blog). Paul acknowledged:

“We have been talking about diversity—and staffing is no better now than it has been. The [national] parks are founded on the idea that they are for ‘public use and enjoyment for all Americans.’ For a century we haven’t communicated with all Americans in a conscious way.”

Under his administration, the park has taken impressive steps to facilitate visitation (e.g., eliminating fees, extending hours, installing adaptive technologies to make boating possible for those with mobility challenges). Such policies are important signs of commitment to inclusion. But Paul and the staff at Indiana Dunes National Park recognized the need to go further.

iSWOOP (Interpreters and Scientists Working on Our Parks), a National Science Foundation–funded four-year project to promote STEM learning in national parks, has worked with Indiana Dunes National Park staff since 2016 (award nos. 1514776 and 1514766). While much of that work has focused on scientists and featuring their research in programs for the public, it was clear that the audience for these programs could be more diverse. iSWOOP encouraged several environmental leaders and organizers who serve the local Latinx community to bring their groups to visit the Dunes.

However, several leaders made it clear that organizing one-time field trips would not be a successful strategy for launching long-term partnerships between organizations serving the Latinx community and the national park. To lay the groundwork for equitable partnerships, they suggested a gathering for organizers and educators to meet key staff and find points for collaboration.

An Event to Bring Together Park Staff and Educators of Color

In response, iSWOOP staff coordinated the first event of its kind: iSWOOP & POC (People of Color) Leaders at the Dunes. Rangers from Indiana Dunes National Park and 16 environmentalists and educators of color from northwest Indiana and Chicago convened to:

During the three-day event, POC leaders met park staff, hiked, paddled, swam, talked with each other, and met with scientists. The concerns and questions POC leaders raised indicate the way cultural capital can expand the conversations about the relevance of science and the ways communities of color engage with the science underway at national parks. We are excited about continuing this work and using the event as a model, and we want to share our experiences and reflections.

During the event, it became clear that certain choices were important for building trust and credibility with participants. The lead event planner and facilitator, Selene González, had previously worked as an open-space organizer in Chicago. A Latinx professional with roots in the community and in Zacatecas, Mexico, she established relationships with park staff and POC leaders before the event and made many of the decisions about the agenda, with input from park rangers and POC leaders. She advocated for all attendees to receive a stipend for their contributions to focus group-type discussions, which set a tone that was respectful of the expertise in the room.

Prior to the event, Selene met with park staff, solicited input via a survey, shared drafts of the agenda, and consulted with Paul, the park superintendent, to discuss the meeting goals and his role. He participated in multiple sessions throughout the weekend (not just as a figurehead making a welcome statement). His presence was noted by some of the POC leaders as a sign of his support. Paul also was quick to take responsibility for following up with local police in response to an unnerving incident of bullying that affected a contingent of the POC leaders.

Recognizing that National Park Service (NPS) rangers can be intimidating, event planners arranged for a law enforcement ranger to come prepared to answer questions. He also brought a list of five things he wanted prospective visitors to know about his role and training. The conversation was intense, honest, and yet respectful. One participant later said, “I work with police and fire departments all the time. It is very, very difficult to engage in a way that is respectful on both ends of the spectrum. I haven’t really seen [that] before when administrators and people of color were open and respectful and genuine.”

For example, Yosso’s concept of family capital refers to a commitment to community well-being, to a broader understanding of kinship. Many of the POC leaders favored a multigenerational approach to science engagement. The calls for intergenerational participation were persuasive:

“We need [this kind of science] for knowledge and it’s important to have engagement with parents. Primarily it is a parent who encouraged us to explore the natural world, but we don’t have a lot of families here.”

“I would love to come here with the youth for something like this [with their families].”

“Youth, [yes], but I think the older generations are left out. We need content for them and not just kids.”

A number of POC leaders also expressed their intention to learn more about the science happening behind the scenes. One said that the event “awakened a [personal] desire to be a bridge between science and people.” Others pointed out the need to expand the approach to science communication, for example:

“I’m an artist. I use visuals in my program. … [I’m asking] How do we turn that [scientific] research into art?”

“How do we communicate science with the story? It made me question: [are] the universities talking about the EJ [environmental justice] hazards here?”

“We are immersed in pollution … As people of color [we need to talk about what it means when we are] trying to bring other people to green spaces that aren’t so green. … Where are the stories about advocating [for environmental justice]?”

Clearly for POC leaders, relationships are very much part of the way they look at the natural world, their communities, and future solutions. So much is possible, and it is urgent that it happen. Yosso’s insights on cultural capital act as a reminder that if we are to launch equitable partnerships, we must take new perspectives. We owe it to public audiences to listen as well as to address perceived knowledge gaps.

Committing to Partnerships for STEM Learning

Participants, outreach, and education rangers now have more than a dozen new contacts who can be advisors and future collaborators. POC leaders made it clear that they would like to meet again and look forward to hearing how the park has taken steps toward acting on their recommendations (e.g., training on diversity, equity, and inclusion for park staff, reaching out to elders to be educators). The POC leaders acknowledged that making change would take time.

The responsibility for moving forward with equitable partnerships is distributed among participants, with POC leader Dejah Powell volunteering to be the local contact for the group and for reunion-planning. Participating NPS rangers volunteered to follow up on the POC leaders’ recommendations related to training and requests for outreach programs. iSWOOP expects to offer support for educational events that the group members plan together and that feature park-based scientific research.

Indiana Dunes National Park staff called the discussions eye-opening. Park leaders realized that hosting people of color means starting conversations with elected officials and law enforcement in nearby communities. If local police officers act in an aggressive manner toward visitors of color, they can easily undermine the park’s efforts to welcome diverse audiences.

Particularly in this political moment, the rangers who plan for groups of Latinx visitors need to be ready to explain their relationship with the U.S. Immigration and Customs Enforcement agency (ICE). Dispelling fear triggered by uniforms and fielding angry reactions to the NPS logo (which borrows the arrowhead shape traditionally associated with indigenous people) may be necessary as well.

Clearly, it is vital for institutions to establish trust with Latinx and other communities of color, and for science engagement professionals to develop a comfort with processing emotionally charged topics and reactions of their visitors when embarking on STEM learning initiatives. POC leaders were correct to advocate for an event where views could be aired and shared. On a field trip, it is all too easy for one perspective on the goals to dominate, and for the dominant narrative about the role of parks to obscure the complex history of land use. POC leaders, NPS staff, and iSWOOP partners all saw the extent to which groundwork has to be laid to support rich STEM engagement. Achieving the NPS mission—public use and enjoyment for all—is a serious, ambitious undertaking. None of it is easy, but it is all easier with partners. 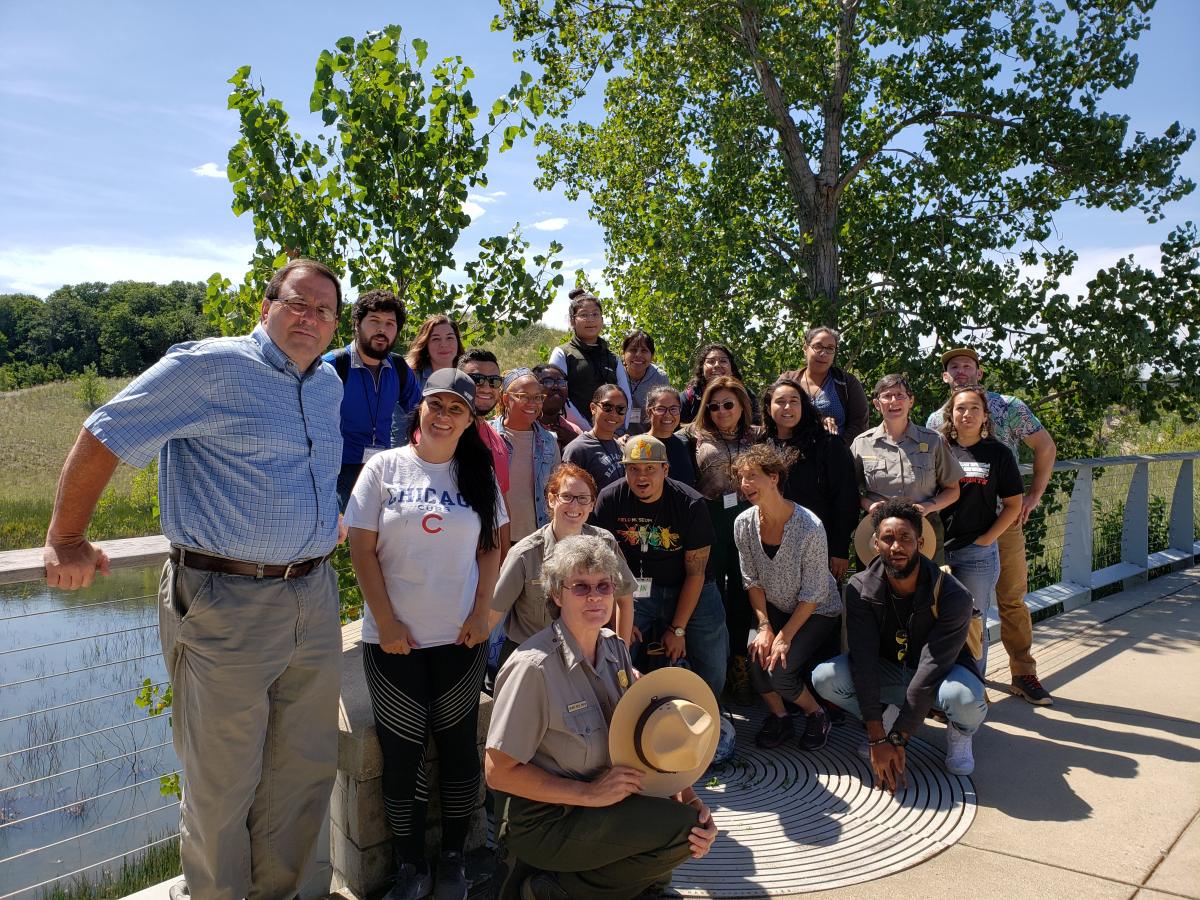 iSWOOP, Interpreters and Scientists Working on Our Parks, is led by Merson along with Nickolay Hristov, wildlife biologist and Louise Allen, biologist of Winston-Salem State University. iSWOOP is grateful to NPS staff and generous scientists around the country who have contributed to the project. Learn more about iSWOOP at iswoopparks.com. To read more about the event, visit iswoopparks.com/about/reports. To request a copy of the agenda or for other questions, contact martha_merson@terc.edu.